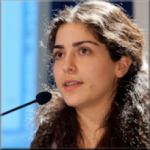 Alongside her work at the Institute, Zahra is enrolled as a PhD researcher at Tilburg Law School. She is also a Board member of the Syrian Legal Development Programme.