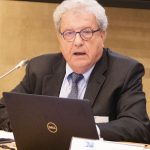 He was member of the Executive Committee (2006-2009) of the European Consortium of Political Research (ECPR) and then Chair (2009-2012). His main research interests include political parties at the national and European level, party systems, elections, democracy and representation in the European Union.