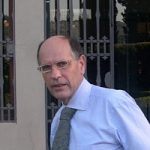 Stefano Bartolini is Director of the Robert Schuman Centre for Advanced Studies at the European University Institute since September 2006, and former professor at the University of Bologna and in the SPS Department of the European University Institute. He has published extensively on political parties. His latest book (Restructuring Europe. Centre formation, system building and political structuring between the nation state and the EU) has been published with Oxford University Press in 2005.