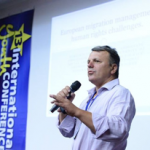 Professor Dimitris Christopoulos (Athens, 1969) teaches at the Department of Political Science and History of the Panteion University of Athens where he works since 2000. From August 2016 until October 2019 he chaired as President of the International Federation for Human Rights where he served as Vice President from 2013. From 2003 to 2011 he chaired the board of the Hellenic League for Human Rights. His courses at the Department of Political Science and History of Panteion University include Introduction at the European Legal and State Theory, Minorities in Europe, Citizenship and Migration, Art, freedom and censorship. He has taught as visiting professor and has provided lectures in different universities in Europe and the US.  He has published in Greek, English, French, Portuguese, Hebrew, Albanian and Serbo-Croatian in scientific reviews or journals in the field of legal and political theory focusing on issues related to human rights, minorities, migrants and citizenship.  Christopoulos is frequently interviewed by international or Greek media and writes regularly in the Greek press and certain web portals.

His latest publications in Greek include a book on the status of Greek citizenship: Who is a Greek citizen? Status of the Greek nationality, (Ποιος είναι έλληνας πολίτης; Καθεστώς ιθαγένειας) Viviliorama Pub. 2019  which is currently being translated to English.