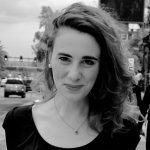 Dr. Sarah Ganty is a FWO Postdoctoral Fellow at the Human Rights Center of Ghent University, theorizing the concept of Merizenship, which she has introduced. She is also a J.S.D. candidate at Yale Law School where she is the Co-president of the YLS European Law Association and teaches at the Central European University in Vienna and the Facultés Universitaires Saint-Louis in Brussels. Sarah’s first monograph, dissecting the concept of ‘migrants’ integration’ in EU law, has just been published by Larcier and comes on top of a handful of articles on migrants’ integration and discrimination on grounds of socioeconomic disadvantages, which appeared in the Human Rights Law Review, European Journal of Risk Regulation, European Journal of Migration and Law, European Convention on Human Rights Law Review, Revue de droit belge des étrangers and Revue Trimestrielle des droits de l’homme, among others.

Sarah is mostly interested in migrants’ law most broadly conceived (including, inter alia, refugee law, immigration law, and integration law), as well as social justice, anti-discrimination law, socioeconomic inequalities, citizenship law and empirical research. With strong background in EU law she is active in the study of the EU legal system too.