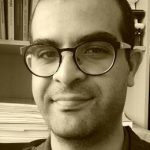 Abdellali Hajjat is Senior Lecturer of Political Science at the University of Paris Nanterre.

His PhD dissertation focused on the articulation of citizenship and race in French law, analysing the ‘assimilation’ requirement in the process of naturalisation and the racialisation of Muslims applicants both in colonial and postcolonial contexts. He published The Boundaries of ‘National Identity’: The Injunction to Assimilate in Metropolitan and Colonial France (Paris: La Découverte, 2012, in French).

He also studies urban uprisings and political mobilizations by postcolonial immigrants in France in working-class neighbourhoods, particularly in May 68 and afterwards. He co-edited the book Political History of Postcolonial Immigration, France 1920-2005 (Éditions Amsterdam, 2008, with Ahmed Boubeker, in French), authored The March for Equality and Against Racism (Paris: Éditions Amsterdam, 2013, in French) and is the principal coordinator of the Biographical Dictionary of Immigrants Movements in France.

He launched a research project on Islamophobia as a ‘total social fact’, the construction of the ‘Muslim problem’ and the redefinition of French secularism, focusing on the complex social mechanisms that entail the racialisation of Muslims in various social fields (politics, mainstream media, human rights law, academia, companies, care sector, etc.). He co-authored with Marwan Mohammed Islamophobia. How the French elites forged the ‘Muslim problem’ (Paris: La Découverte, 2016, in French).

As a EURIAS/IASH Fellow, Abdellali will be working on his last research project, How does the State fight Everyday Racism? The French Justice System facing Racist Acts and Speeches. The purpose is to renew the socio-historical analysis of racism in France by raising some research questions and appropriate methodology to overcome the intellectual paradoxes of French public controversies that, unfortunately, tend to focus on one form of racism at the expense of others, without trying to understand all forms of racism (anti-Semitism, Islamophobia, anti-Arab racism, anti-Black racism, anti-Roma racism, etc.) in a global analytical framework. The ambition of the project is to carry on a thorough investigation through four dimensions: the repression of racist discourse, the measurement of racist acts, the sociology of the perpetrators and the sociology of the victims.