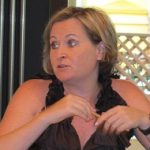 Dr Claire Healy holds a B.A. (International) in History and German from the National University of Ireland and conducted Masters research in Latin American History and Spanish at the University of Hamburg. In 2006, she was awarded a PhD in Migration History by the National University of Ireland. She is currently Research Officer at ICMPD, coordinating international comparative projects on child begging and visa regulations. Claire has been invited to speak on citizenship regulations by the Migration Policy Group and the Council of Europe. She was previously a Portuguese Foundation for Science and Technology post-doctoral fellow at Lisbon University Institute, researching language and migration, and completed research for the Immigration Observatory on naturalisation and citizenship in Portugal.
During 2007-2009, Dr. Healy was an Advisor at the Portuguese Government’s High Commission for Immigration and Intercultural Dialogue. There she worked on various EU Integration Fund projects, including “One-Stop-Shop: A New Answer for Immigrant Integration” and “Be naturalized or become a citizen?” From 2005 to 2007, Dr. Healy worked in Dublin as a Research Consultant for a number of NGOs in the field of migration and refugees, authoring two published reports for the Immigrant Council of Ireland, on language and citizenship programmes for migrants and on state coordination of migration policy. She also co-authored a report for the CADIC Coalition on migrants in Ireland whose status is based on their Irish-born children. Claire was previously President of the Society for Irish Latin American Studies, and Editor of the Society’s electronic open-access journal, Irish Migration Studies in Latin America. She has taught at Summer schools at Lisbon University Institute and at an international seminar in Poland. Claire has also worked as a translator and speaks German, Portuguese, Spanish, Irish, French, Cape Verdean Creole and basic Croatian.