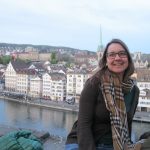 Julia Hermann is a post-doctoral research fellow at the Department of Philosophy and Religious studies at Utrecht University, The Netherlands. She is a member of the research programme “Evolutionary Ethics? The (Meta)-Ethical Implications of Evolutionary Explanations of Morality”, funded by the Netherlands Organisation of Scientific Research (NWO). She holds a PhD from the European University Institute. Prior to joining Utrecht University, Julia was lecturer in social philosophy at Maastricht University. In 2015, her book On Moral Certainty, Justification and Practice. A Wittgensteinian Perspective was published by Palgrave Macmillan. Other recent publications include “Possibilities of Moral Progress in the Face of Evolution” and “Sinnott-Armstrong’s Empirical Challenge to Moral Intuitionism: A Novel Critique” (both Ethical Theory and Moral Practice). Julia is an author of the blog “Justice Everywhere”.