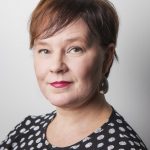 Saara Koikkalainen (D.Soc.Sc) is a migration sociologist who has conducted research on highly-skilled Finns working in the European Union labour markets. Her other research interests have included, for example, the EU free movement policy, tourism work and recruitment practices, conditional cash transfer programs and migration decision-making. Together with colleague David Kyle (UC Davis) she has launched a new concept called cognitive migration, which describes the process of imagining one’s mobility prior to actually making the physical move.

Dr. Koikkalainen has been a Fulbright graduate researcher at University of California, Davis (2010) and a visiting graduate student at Department of Political and Social Sciences at European University Institute (2012), where she took part in the work of the Migration Working Group. She has two ongoing research projects, one on the personal stories of Iraqi asylum seekers who chose to travel through Europe to Northern Finland during the so-called refugee crisis of 2015 and one on the situation of Nordic migrants in London during the Brexit process.​