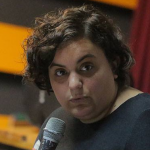 Magdalena López has a PhD in Social Science from the Universidad of Buenos Aires (UBA, Argentina). She is a young researcher at CONICET (Argentinean National Commission of scientific and technique research) working at the Instituto de Investigaciones Gino Germani. She coordinates the Group of Social Studies on Paraguay at the Institute of Latin American and Caribbean Research at University of Buenos Aires. She studied the Paraguayan State and its migrant laws regarding the process of migration of its population to Argentina, Currently, she develops two areas of studies: Democracies and Dictatorships in Latin-America and the relation between political and economic elites in Paraguay. She analyzes the continuity between the dictator and the democracy in the repression system and the organization of different institutions in Paraguay and the connection between law, public-policy and economic privileges in the country. She had been studying at the University of Buenos Aires for more than 12 years (first degree and postgraduate too) and she has been awarded with and UNFPA prize for her works about migration and human rights. She has a full connection with organizations of the civil society and migrant groups of border countries which live in Argentina.