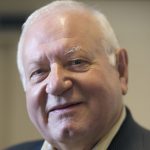 Demetrios G. Papademetriou is a Distinguished Transatlantic Fellow at the Migration Policy Institute (MPI), which he co-founded and led as its President for the first 13 years and where he remains President Emeritus and a member of the Board of Trustees. He served until 2018 as the founding President of Migration Policy Institute Europe, a nonprofit, independent research institute in Brussels that aims to promote a better understanding of migration trends and effects within Europe; he remains on MPI Europe’s Administrative Council.

Dr. Papademetriou is the convener of the Transatlantic Council on Migration, which is composed of senior public figures, business leaders, and public intellectuals from Europe, the United States, and Canada. He is also the Co-Founder and International Chair Emeritus of Metropolis: An International Forum for Research and Policy on Migration and Cities, and served as Chair of the World Economic Forum’s Global Agenda Council on Migration (2009-11); Chair of the Migration Committee of the Organization for Economic Cooperation and Development (OECD); and Executive Editor of the International Migration Review. He has published more than 270 books, articles, monographs, and research reports on a wide array of migration topics, lectures widely on all aspects of immigration and immigrant integration policy, and advises foundations and other grant-making organizations, civil-society groups, and senior government and political party officials, in dozens of countries.