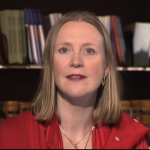 Catriona Seth was brought up in the U.K., in Switzerland, in South America and in Belgium. She attended a number of schools, learning various European languages on the way past, before studying at Oxford and the Sorbonne. She holds a British passport, but works for the French state as a Professor in 18th-century French studies at the Université de Lorraine. She has published widely on Enlightenment literature and the history of ideas.