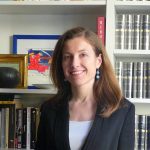 Francesca Strumia is Senior Lecturer at the University of Sheffield School of Law,where she teaches in the areas of European Union Law and Comparative Immigration Law. Her research focuses on free movement of persons in the European Union, comparative immigration law and citizenship and nationality law. She has published several articles and two books on these issues, including “Supranational Citizenship and the Challenge of Diversity-Immigrants, Citizens and Member States in the EU” (Martinus Nijhoff, 2013). She holds an SJD (Doctorate in Juridical Science) from Harvard Law School and a PhD in Comparative Analysis of Law, Economics and Institutions from the University of Torino.