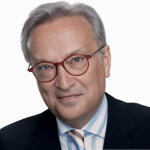 Hannes Swoboda was elected as President of the S&D group in 2012. As a staunch pro-European and a dedicated member of the Social Democratic Party in Austria (SPÖ), he joined the European Parliament right after Austria’s accession to the EU and was the leading candidate of the SPÖ in following elections (2004, 2009). He is known as an engaged parliamentarian-having served in 15 committees, 11 delegations and the rapporteur of countless reports. Through his regional focus on south-east Europe, central-Asia and Russia and steady contribution to the fight against political extremism and promoting minority rights, Swoboda is considered to be an expert of European integration. Having served as a vice-president of the S&D, his law and economics background, the 14 years representing the interest of employees in the Vienna chamber of labour as well as the nine years he served in the Vienna Assembly and Municipal Council provided him with vast prior experience and knowledge of foreign affairs, urban development, education, health, housing and labour policies.
Website: http://www.hannes-swoboda.at
Facebook Twitter Email