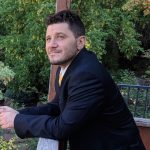 Maxim Tabachnik grew up in Ufa, Russia. He recently received his Ph. D. from the Department of Politics at the University of California, Santa Cruz. His dissertation’s empirical findings on the politics of national identity and citizenship in Azerbaijan, Georgia and Moldova and a theoretical proposal on nationalism have been published as articles in Post-Soviet Affairs and Nations and Nationalism, respectively. His book entitled “Citizenship, Territoriality, and Post-Soviet Nationhood” is coming out shortly from Palgrave McMillan. Previously, Maxim received his MA in Political Science from Universitat Autonoma de Barcelona and his BA in the same field from Duke University. He also holds an International MBA from York University in Toronto in collaboration with ESADE in Barcelona as well as professional experience in business strategy. His research crosses the subfields of comparative politics, international relations, history and political theory. Maxim is fluent in Russian as well as most modern Romance languages.