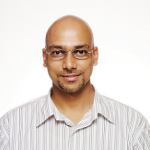 Arun K. Thiruvengadam is an Associate Professor at the School of Policy and Governance, Azim Premji University, Bengaluru, India.  He holds degrees in law from the National Law School (B.A., LL.B, 1995; LL.M 2001) and New York University School of Law (LL.M 2002; JSD 2007). He served as a law clerk to Chief Justice A.M. Ahmadi at the Supreme Court of India (1995-7), and has practiced law before the High Courts of Delhi and Madras, and the Supreme Court of India.  Between 2005-2015, he taught at the Faculty of Law, National University of Singapore.  He has taught in a visiting capacity at several institutions, including the University of Toronto, Canada, the University of Trento, Italy and the Central European University, Hungary. His teaching and research has focused on comparative constitutional law, Indian constitutional and administrative law, law and development, law and politics in South Asia, and legal theory.  His publications include two co-edited volumes on Comparative Constitutionalism in South Asia (Oxford India: 2012) and Emergency Powers in Asia (Cambridge UK: 2010).  His book on the Constitution of India for the Hart-Bloomsbury series on Constitutional Systems of the World is due to be published in early 2018.