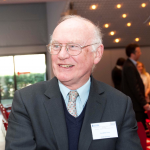 Tony Venables is Director and founder of the European Citizen Action Service (ECAS). He has a long working experience in European issues, in particular in the areas of the EU’s relationship with NGOs, free movement of people, citizenship rights, and the protection of consumers in Europe.  His work also relates to transparency, governance and institutional reform of the European Union.  After graduating from University of Cambridge with a first class degree in 1966, Tony Venables started to work as an Administrator with the Council of Europe as Secretary of different Parliamentary Committees, including the Political Affairs Committee. From 1973 to 1978, he was an administrator in the Council of Ministers’ Secretariat in the department dealing with institutional affairs and relations with the European Parliament. In 1978, he became Director of BEUC (European Bureau of Consumer Unions) and successfully built up the organisation, before leaving in April 1990 to set up ECAS. He was a member of the Commission’s high level panel on free movement of people chaired by Simone Veil.