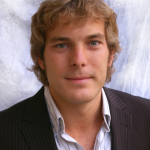 Martin Wilhelm, born in 1981 in Rostock, Germany, spent a year as a volunteer in Bournemouth, England, after completion of his high school education.
After graduating in political sciences and economy in Greifswald, Sweden and Serbia, he got involved in a European network of students cultural festivals in Norway and Hungary among others.
He worked for different institutions (Goethe-Institut, European Movement, Deutsche Gesellschaft für Internationale Zusammenarbeit, German embassy) in Serbia and France, among others, and produced a documentary film on mobility in Europe for the channel ARTE. In 2009, Martin Wilhelm went to Berlin and worked for the foundation “Zukunft”. With the creation of the association “Citizens For Europe”, he focussed his activity on the issues of European citizenship, migration and participation in Europe. Since 2010, Martin Wilhelm has been manager of this association. He works particularly on the issues of European democracy and on civil society projects.