The last four decades have seen a major increase in talent-based citizenship acquisition around the globe. Swapping nationality has become a strategy for a number of professional sportspeople to find the environment where their talent can be realised to its fullest potential and yield reputational, financial and developmental gains. The ‘marketisation of passports’ in this respect followed the development of the sports industry and the commodification of athletic activity. Yet one often overlooked aspect of strategic citizenship is its gender dimension, whereby the number of sportsmen with dual nationality is significantly higher than the number of sportswomen holding multiple passports. Using the example of the FIFA World Cup, we argue that this discrepancy is caused by gender inequalities engrained in sports markets and the ‘male face’ of sports in many national cultural contexts.

The 2018 FIFA World Cup had sparked a debate on the global trend towards dual citizenship. Almost a third of the players who took part in the competition had two or more nationalities and a substantial number of them was born outside of the country they represented. Yet this debate was not revived at the 2019 FIFA Women’s World Cup, because only 38 out of 552 players had more than one nationality. This relatively small number would be further reduced if Jamaica had not competed: over a half of the Jamaican team are dual citizens, mostly combining Jamaican with US nationality. 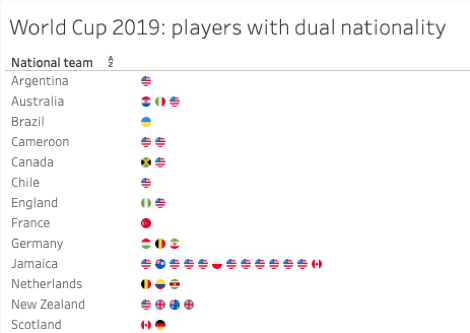 Own elaboration; original data from https://www.livefutbol.com/
Click on the picture for interactive information.

Eight international teams host players with US nationality. These women, most of whom have been born or raised in the US, have opted to play for the national team of a country to which their family holds some previous relation. In many cases, acquiring dual citizenship has been a strategy for ensuring that they do play under a national flag because recruitment for the female US football team is highly competitive. Notable examples include Teresa Noyola and Veronica Perez who opted to play for Mexico despite also having US passports.

Many sportspeople acquire dual citizenship following the invitation of a national sport association to join the national team of their parents’ home country. In most of these cases, athletes already possess passports of these countries or are eligible to obtain them on the basis of ancestry. The second nationality in these cases becomes a ‘functional sporting nationality’. For both male and female athletes, dual citizenship represents a strategic choice that opens the doors to new professional opportunities. Yet, mostly male athletes become dual nationals and use the second passport to enhance their chances in the global sports market. There are two main reasons for this trend, which reveal an important gender dimension of strategic citizenship.

First, competitive sports function within a market that is manifestly male-dominated, especially in team sports. This means not only that there is an uneven gender distribution of the incentives to relocate internationally, but there are also major income discrepancies between sportsmen and sportswomen. The Forbes ranking of the world’s 100 highest-paid athletes lists a single woman – tennis player Serena Williams – at the 63rd place. Greater income, contractual security, and agent support mean that international mobility is facilitated among male professional athletes, which then motivates them to further enhance their professional opportunities through dual citizenship. Such is the case of the Barcelona football player and the world’s highest-paid athlete Lionel Messi, a dual Spanish and Argentinian national.

In contrast to their male counterparts, professional female football players can count on sufficient financial incentives in only twenty-two out of 147 FIFA-listed countries. Other crucial market-related conditions, such as contractual stability, appropriate childcare, and welfare are still insufficiently tailored to the need of sportswomen. The lack of these labour guarantees exposes female athletes to insecure working conditions that make international mobility extremely difficult. In many cases, it is a risky choice that few are willing to make.

Second, sport teams have an important role for building national identities in different cultural contexts. This is especially true for football, a sport that was central to the formation of the imagined cultural and political community in Argentina and many other countries around the world. Football has also been traditionally a ‘male sport’. In Brazil between 1941 and 1979 there was a ban on female footballers because kicking a ball was considered to be ‘incompatible with their nature’. English women could not play in clubs affiliated with the Football Association until 1971, and Scottish women until 1974. Even after the formal bans were lifted, prejudice and stereotypes remained. As a result, football federations around the world continue to provide greater support to men than to women. Over the last few years, several players have been naturalised so that their national teams could progress further in international football. In 2016, for example, Brazil-born Mario Fernandes was granted Russian citizenship by presidential decree from Vladimir Putin. He officially joined the team in 2017 after meeting FIFA’s five-year residency requirement. With some notable exceptions, such as Jamaica and Mexico, this strategy of poaching talented players remains largely alien to female football. National football federations operate within their respective contexts, providing lower incentives to female players. While football is on the extreme end of the spectrum of the ‘male face’ of sports, a number of other professional female athletes face obstacles when seeking professional opportunities in different cultural environments. As a result, they are less inclined to strategise about their citizenship, because in some cases even a claim to another passport would provide them with bleak career prospects.

A wind of change or an indicator of a gender gap in strategic citizenship?

The football federations of France, England and Spain have significantly improved the financial and structural incentives for women’s football over time. The professionalisation of football in these countries seems to have had a positive effect on female players. In Spain, for example,  the number of women and girls participating in professional football has increased by 63 per cent since 2012. However, working conditions in most of the other countries remain a far cry from what they should be. Female players are unlikely to seek dual citizenship if they are unable to receive adequate contractual safety, medical support, social welfare and professional recognition in the destination country.

Far from being limited to football and sports in general, the issue of the ‘gender gap’ permeates many aspects of the recent trend of strategic citizenship acquisition. For instance, 79 per cent of the applicants to Malta’s Individual Investor Programme granting citizenship on the basis of investment were male and only 21 per cent female. This opens up a broader question of whether strategic acquisition of citizenship in fact replicates the structural dynamics of markets with high inequalities between men and women. We hope that scholars will pick it up.