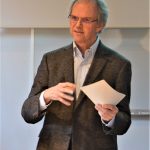 Rainer Bauböck is part time professor in the Global Governance Programme of the Robert Schuman Centre for Advanced Studies at the European University Institute. He is corresponding member Austrian Academy of Sciences and chairs the Academy’s Commission on Migration and Integration Research. His research interests are in normative political theory and comparative research on democratic citizenship, European integration, migration, nationalism and minority rights. Together with Jelena Dzankic (European University Institute), Jo Shaw (University of Edinburgh) and Maarten Vink (University of Maastricht), he co-directs GLOBALCIT, an online observatory on citizenship and voting rights.

From 1986 to 1999, Rainer Bauböck was assistant professor at the Institute for Advanced Studies, Vienna. He frequently taught at the Universities of Vienna and Innsbruck and is a recurrent visiting professor at the Nationalism Studies Program of the Central European University Budapest. He was also a visiting academic at the Bellagio Rockefeller Foundation (2006), Yale University (2005), the University Pompeu Fabra in Barcelona (2003), the University of Bristol (2002), University of Malmö (2000-2001); the Institute for Advanced Study, Princeton and Princeton University (1998-1999); and the University of Warwick (1990-1991). In 2003-2005, Rainer Bauböck was president of the Austrian Association of Political Science. In November 2006, he was awarded the Latsis Prize of the European Science Foundation for his work on immigration and social cohesion in modern societies. From 2007 to 2018 he held the chair in social and political theory at the Department of Political and Social Sciences of EUI. In April 2013 he was elected corresponding member abroad of the Austrian Academy of Sciences. From October 2012 to January 2016 Rainer Bauböck was Dean of Graduate Studies at the European University Institute. In 2018/19 he was senior visiting fellow at the Lichtenberg Kolleg of the University of Göttingen and at the Social Science Centre Berlin (WZB). Click here for Rainer Bauböck’s full CV. Click here for his Google Scholar profile. Click here for his accessing his publications on ORCID.

Introduction: expulsion and citizenship in the 21st century
Citizenship Studies, 2020

Are There Any Cultural Majority Rights? CEU Lecture 22 February 2021

There are several overlapping themes in Rainer Bauböck’s publications. Each has been listed only once under the heading where it fits best. Texts marked in bold state a new idea or cover a topic more comprehensively. Working papers have been included only selectively. For a full list of working papers, book reviews and commentaries, see the chronological bibliography in the CV.